. People know really nothing about art. No! art of any passed times unknown for them the same well as art of our days. They have heard some names and sometimes are able to repeat several descriptions and definitions which was put in their brains in primary school. It happens, some of them  know that Dali had long moustache, Picasso painted 'Hernika', and da Vinci was the most genius artist of about 15-16 century, it's a lot. Sometimes people buy pieces to put them to the wall in the hall, kitchen, or bedroom, good for their image and mood.  Well, but however true information about ART hit after hundred doors from billions of people! Pity! But most of them even have no idea how poor they are!

Because the Institute of Arts History, of Russian Academy of Sciences collected all knowledge about Art in the only hands, and hit them from other people!

Institute should share!
Action of Protest, and Ultimatum to the Institute of
Arts History:

Artist Igor Baskin and group 'Igor Baskin & Co, ltd' provide protesting action against total unknowing of art by the wide masses of people. All responsibility for awful situation it decided to put on The Institute of Arts History of Russian Academy of Sciences, which the only owns of all knowledge about Art, but all the rest people, wide masses, own nothing. All hit knowledge should be expropriated, nationalized and shared to masses through the card system.

The Order - Ultimatum
(fragment)
<... Institute of Arts History should share to people all collected and hit knowledge about art... knowledge should be shared to people during three weeks since the day of handing The Order-Ultimatum ... >

Ultimatum was handed to Director of Institute of Arts History Tatiana Kliavina. It was promised that Institute will share hit knowledge during ordered time.

BUT IT IS NOT DONE STILL 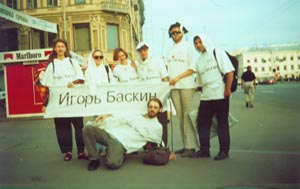 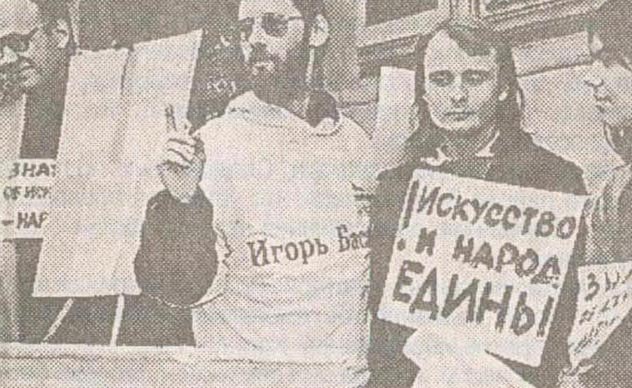 'Sale The name of the Artist on the Street'